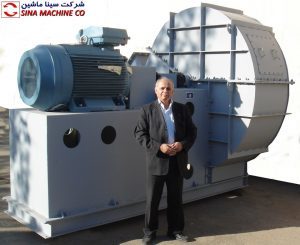 Sina Machine Company was established in 1366 with design and engineering license in process industries and design and assembly license in the field of design and manufacture of chemical mixers as well as industrial activity certificate in fan production and industrial ventilation systems.

The company first started operating in a 200-square-meter workshop in Mehrshahr, Karaj, and after expanding production space over the past years, it now operates in a factory of 3,000 square meters in its original location.

In recent years, the company has specialized in designing and manufacturing a variety of industrial fans, air-conditioning equipment and industrial ventilation systems as well as providing consulting on the design and implementation of mining projects.

Sina Machine Company is the first company in Iran to start performance testing of industrial fans in accordance with AMCA-210 and ASHREA-51. Initially, fan performance testing was performed according to DIN-24163, but in recent years, with the worldwide expansion of ISO-5801, the equipment required for this standard has been fully manufactured by Sina Machine and now part of Most of our fans are tested according to ISO-5801 standard.

Since 2004, Sina Mach Company has been testing the performance of industrial fans at the main site of fan installation, which is provided for the fans made by the company as well as the production fans by Iranian and foreign companies. Fan testing services are performed by Sina Machines in accordance with AMCA 230-90 and AMCA 803-2002.

The AMCA-802 is such that the performance of the fans can be determined and evaluated before the original fan prototype is manufactured.

The founder and CEO of Sina Machine Company Mr. Mohammad Nazari is a graduate and master of mechanical engineering from Sharif University of Technology who has been working in designing and manufacturing industrial machinery since 1976.